Does this confess the 'faith of the church'? 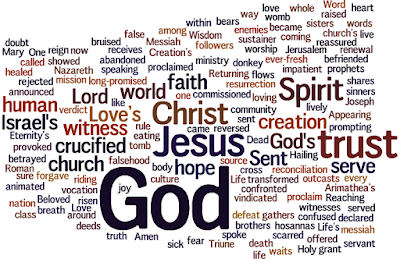 Late last year, I began pondering what issues I would want to contribute to a contemporary statement of the church's trinitarian faith. This was prompted by several factors. Conversations in China last November with colleagues from the United Church of Canada reminded me of that church's history of writing statements of faith. The encouragement of my own church's Basis of Union to confess the church's faith in fresh words and deeds is a constant presence to my theological work. More sustained teaching in Christology and Trinity in recent semesters has led me to engage more explicitly with the continuing discussions about gender, the theological significance of the specifics of Jesus' humanity, and the eschatology of the New Testament - all issues where the classical creeds are problematic. At the same time my conviction grows that the 'faith of the church', including its trinitarian content and structure, remains a fruitful source of wisdom; it warrants critical re-articulation rather than dismissal on the grounds of either its allegedly primitiveworldview or its alleged captivity to Greek metaphysics. For that reason I believe that any contemporary statement of faith succeeds to the extent that it is a fresh confession of the faith of the church and it fails to the extent it that it is an idiosyncratic statement of individual belief. Learning to use statements of faith as confessions of who we 'trust' rather than as lists of things to 'believe' is, in my view, an important spiritual challenge for the contemporary church.

The result of these various promptings is below. It will be evident that some of my criteria are in tension with each other (e.g., I've deliberately retained the word 'Lord' to reflect the biblical witnesses' own re-framing of the term). Specific echoes of the Basis will be very easily heard. I post the statement here for reflection and comment. It remains a work in progress and I'd value both critique and suggestions for improvement.

We trust one God: the Love, Life and Truth who is the source and sustainer of all that was, is and will be.

Sent from the very heart of God's love for the world, he became human in the womb of Mary. He came not to be served but to serve.

Hailing from Nazareth, he proclaimed the long-promised and coming reign of God; he befriended outcasts, healed the sick, forgave sinners, confronted falsehood, and showed mercy to his enemies.

Reaching Jerusalem, riding a donkey, prompting hosannas, he offered himself as the servant Lord; he was rejected, abandoned and betrayed; he was crucified on a Roman cross as a false Messiah.


Dead in Joseph of Arimathea’s tomb, God raised him; the human verdict was reversed; his mission was vindicated; his reconciliation of the world to God was declared.


Appearing, speaking and eating, his transformed body provoked fear, doubt, joy and hope; his resurrection announced the defeat of death; he reassured his confused followers and commissioned them as witnesses to his way, truth and life.


Returning, now scarred and bruised, to the One who sent him, he shares in Love’s rule and receives the worship of his sisters and brothers from every culture, class and nation.


We trust the Holy Spirit, the loving and lively breath of God, who flows in, around and within the whole creation.


This same Spirit spoke through Israel's prophets, inspired Jesus' ministry, and gathers a community, the church, through which Christ bears witness to himself.


Sent by the Spirit, the church, like Jesus, is called to serve; in ever-fresh words and deeds, it is to proclaim the risen crucified Jesus Christ; its vocation is to witness to God's renewal of all creation, for which it waits with an impatient but sure and active hope.


This is the church’s faith. In this Triune God we trust. God grant us so to live. Amen.

Great work Geoff. I know it's difficult because what we know of the Father is largely from who Jesus revealed him to be, but in order to increase the focus on The Trinity could you have as the second sentence an overall understanding of who the Father before going into detail about Jesus.

Also there is no mention of the eschatological misson of Jesus coming again to recreate all creation. Is this an intentional omission? And if it is, just wondering what that reason is.

Thanks Greg. Yes, the issue of the first clause is proving to be the challenge (esp as per FB comments). I need to do some more work on that. I did try to capture the future eschatology by reference to the 'renewal of all creation'. Do you think more is needed? I certainly wasn't trying to avoid the issue.

Hi Geoff. I've only come across this now, but it's such an interesting topic that I have to post a question or two!

I've noticed that you've specifically avoided any gendered language, primarily the 'Father' and 'Son' of the Apostles' and Nicene Creeds. I can't help but wonder at that? Uncomfortably gendered as they may be, can it be appropriate for a fresh confession of Christian belief in God to refrain from the term that the Jesus of the gospels uses to refer to God (the Father)? Similarly, while 'Son of God' is an unavoidably gendered term, it seems to be gendered in a way that reflects a historical reality. While it would be appropriate to avoid 'son' language in reference to generic individuals, it's more difficult to see the problem in using a masculine term to refer to a historically male individual. Considering the significant earlier scriptural connections implicit in the title 'Son of God', I'm curious why it is omitted here. In the strict Trinitarian sense we do not think that God the Son is biologically male; but in connection with the incarnate, gendered Jesus, is not the title appropriate?

I notice also a conspicuous lack of reference to a virgin birth. Your phrase 'he became human in the womb of Mary' carefully avoids any mention of Jesus' conception. The traditional creeds specifically reference both conception by the Spirit and Mary's virginity. Is there some desire here to avoid those issues and the difficult metaphysical questions they imply?

The entire creed, it seems to me, has a particular emphasis on love, occasionally capitalised, as the identity of God. While not presented as the entirety of God's being, the emphasis nonetheless reads quite strongly to me. While love is certainly one of God's attributes and the Incarnation cannot be understood without reference to that love, its primacy here stands in contrast to the traditional creeds. Was there a particular motive in this reframing?

Finally, I cannot help but also notice the omission of any notion of judgement. Sin is barely touched on either. You mention that the classical creeds are problematic on, among other things, the matter of eschatology. Do we lose anything important by considering an eschatology bereft of judgement, though? Do we risk approaching a purely therapeutic notion of God, an undemanding dispenser of forgiveness?

Thanks Daniel. Good questions - although I think I want to defend my proposal against them. Ultimately, 'Father' and 'Son' will inevitably have a place in the language of Christian faith. Must, however, those terms be present in every confession of that faith? I am reasonably confident that I have nevertheless said in this Creed what the terms Father and Son actually point to. My omission of the Virgin birth was not to avoid metaphysical issues (just about every line in this confession does actually raise difficult metaphysical issues), but because I don't believe its essential to a confession of the faith. At the same time, I think that by referencing Mary only (and not Joseph) as the particular source of Jesus' humanity I do point to the paradox that Christian faith associates with Jesus' conception. I'm very happy that the inclusion of Love reads quite strongly. It's absence from the Creeds has too easily fostered ways of speaking of God without reference to love. I take your point about the muted reference to sin and the absence of any reference to judgement. I'll think more about that, but even now I'd want to say that the Jewish and Christian theme of judgement always has an impulse towards renewal. I've tried to capture that. Thanks again for your questions and prompting some more thinking on my part.