Last weekend I participated in the Ethos event, A Civil Conversation on Homosexuality. I was one of eight panellists. We presented in groups of two or three around, respectively, biblical/theological issues, the local church, pastoral and counselling challenges, and legal matters. A wide diversity of convictions, expertise and experiences was included. The ensuing conversation was rich and challenging.

Each of us on the panel had 5 minutes to make an initial contribution to the discussion. Mine is included below. Clearly, there is significant risk is posting this brief overview. With such a skeletal outline of the argument, its weaker points are easily exposed and the methodological strategies it employs are identified but left unexplained.

A full version (10,000+ words) of my argument will be published as the Summer Zadok Paper next month. An even slightly longer version of the argument, specifically oriented to debates within the Uniting Church in Australia, will be included in my book Disturbing Much, Disturbing Many: Theology Provoked by the Basis of Union to be published in the New Year.

In supporting a revision of the church’s historical rejection of homosexual practice, my argument does not consist of a generic appeal to ‘inclusion’, nor to an application of the political discourses of ‘rights’ or ‘liberation’, nor even to a theological endorsement of ‘homosexual experience’, however that might be defined.

My argument weaves together reflections on what it means to appeal to scripture in the face of novel experiences of the Spirit. The novel experience I’m seeking to bring into conversation with Scripture is not an abstract ‘homosexual experience’, but the church’s experience of having gay disciples within it.

In other words, the experience which presses itself upon the church is the experience of Christian men and women who, through mutual attraction, friendship and affection have formed a relationship with a partner of the same gender. These relationships display and practise fidelity and mutual nurture, and allow each partner to develop as disciples of Jesus Christ by loving God and neighbour, befriending strangers, praying for enemies, and otherwise contributing to and building up the life and witness of the church.

It is with this experience in mind that I believe the experience of the inclusion of the Gentiles becomes a significant biblical paradigm for our contemporary theological reflections.

Instead, my appeal to the inclusion of the Gentiles goes like this:

The appeal to the Bible which was prompted by the outpouring of the Spirit on the Gentiles is itself a paradigm for our appeal to Scripture in our reflections on the place of homosexuals in the church.

Inclusion of the Spirit-filled Gentiles was ultimately justified by novel ways of reading scripture.

Crucial here is the reference by James to the prophets, principally Amos 9, in the deliberations at Jerusalem recorded in Acts 15.  Time does not permit a full engagement with this text, other than to say that James – or Luke – manifestly tinkers with this text. It is not a direct quote form the Septuagint, a fragment is added from Isaiah, and another from Zechariah. Even in the use of Amos, the image of redemption is altered.

In other words, James – or Luke – has not discovered or revealed ‘the meaning’ of Amos or the other prophets; he has produced what one commentator has described as “a pastiche of fragments” (1).

What we see here is the kind of freedom, imagination and creativity which the writers of the New Testament characteristically exercised in their use of and appeal to their Scriptures.  Scripture was used, under the intense pressure of spiritual novelty, to reimagine the purposes of God.

How might we appeal to Scripture to reimagine the purposes of God under the pressure – or, as I would prefer to say,  the gift – which the presence of openly gay disciples in the church is to the church.

I suggest that there are voices in Scripture which help us reimagine the nexus of creation, nature and order in ways which are alternatives to the very tight nexus of creation, nature and order evident in Romans 1 and which has been so pivotal for sustaining the classical Christian rejection of homosexual practice. There, Paul argues God’s creative act produces a natural order to which corresponds a moral order, a moral order which is violated by homosexual acts.

Job 39  and Ecclesiastes 7 tell a different story – not about homosexual acts, to which they do not refer – but about the prior relationship between creation, nature and order. 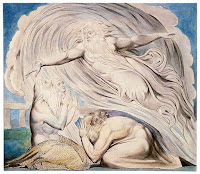 In his response from within the whirlwind to Job’s protests, God points Job to those dimensions of the good creation which lie beyond the human perception of order. Strikingly, this includes the flightless ostrich.

These creatures appear ‘disordered’. The ostrich has wings but cannot fly; in careless abandonment it fails to protect its eggs; it treats its children with cruelty, as if they were not even its own. Yet God declares these creatures with these features to be his work. Job is not invited to see some otherwise hidden order, nor to understand this apparent 'disordering' as the result of a universal fall. Rather Job is summoned simply to acknowledge that these creatures with these features belong to God’s wise creative work and thus play their role in the integrity of creation. In the words of one commentator: “God confronts Job with things that his…categories cannot possibly comprehend.” (2)

Similarly, Qohelet, the author of Ecclesiastes, repeatedly queries whether there is any justice or order in the world, and is unable to find it (e.g., 1:16-17; 2:17; 8:14). So, Qohelet declares: “Consider the work of God; who can make straight what he has made crooked” (Eccl 7:13). In commentary on this verse it has been said, the “universe has wrinkles”, some of which are simply part of the “act of creation itself”. (3)  As with the book of Job, the point at issue is the difference between the integrity of God’s wise creation and the limited human perception of order.

I suggest that by linking these texts to other biblical texts on, specifically, ‘desire’ and ‘the body’, we can envisage a biblically and theologically coherent “pastiche of fragments” which invite us to reimagine the place of homosexuality within the integrity of God’s wise creation.

Posted by Geoff Thompson at 9:43 AM 4 comments:

Jesus: A Case of Mistaken Identity - A Sermon

From Mark 8, I take the themes of curiosity, confession and confusion and build the sermon around that.

The text of the sermon is available here.
Posted by Geoff Thompson at 10:51 PM No comments:

A further episode in the conversation between Ben Myers and me following Tony Abbot's Thatcher Lecture: "The Welfare of the City: Re-thinking Church and State". Prompted to think a bit more about a theological understanding of the state and its relationship to culture, I conclude the article with these suggestions:

I suggest that rather than repeat received theologies of the state, or even develop new ones, for this new context, Christian theological energy could be invested in theologies of citizenship in the midst of cultural diversity. For much of the Western theological tradition, cultural diversity has been a problem to be solved. Might it be that it is itself a good of creation, and one that invites a level of theological engagement which would match that which has previously been devoted to theologies of the state? Power and authority will weave their way through such diversity in ways that both help and hinder human flourishing.

For that reason, and many others, Christians are called to learn to live, think and imagine in ways that will allow them, in the words of Jeremiah, to "seek the welfare of the city" - this strange and unfamiliar "city" in which God has presently placed the Western church.

The earlier pieces can be found as follows:

Love Your Neighbour: Why Tony Abbott is (partly) Right and his Critics are (partly) Wrong

Love Your Enemy: What Tony Abbott Gets Wrong about Christianity - A Response to Myers

On Not Confusing Church and State: Response to Geoff Thompson

Posted by Geoff Thompson at 10:12 PM No comments:

A Civil Conversation on Homosexuality

On Saturday Nov 21st, I'll be part of a panel discussing homosexuality. The event is being organised by Ethos, the Evangelical Alliance's Centre for Christianity and Society. A panel, representing a wide range of denominational and theological commitments, has been convened. The panel is also notable for the inclusion of various domains of expertise. My particular contribution will be to discuss the biblical and theological issues with Gordon Preece and Mark Lindsay.

All details can be located here, but in summary:

Posted by Geoff Thompson at 1:32 PM No comments:

I've written a response to a response to Tony Abbott's Thatcher lecture. It's been published on the ABC Religion and Ethics website. Using Ben Myer's earlier response as a point of departure, I argue that Abbott is running with an inadequate understanding of the relationship between Christianity and Culture and that his calls to limit hospitality, on the grounds that it risks change to Europe, is misguided.  You can read the article here: Love Your Enemy: What Tony Abbott Gets Wrong about Christianity - A Response to Myers

And now Ben has responded to my response: "On Not Confusing Church and State: Response to Geoff Thompson"
Posted by Geoff Thompson at 10:19 AM No comments: