"You believe in Genesis, do you?"

"You believe in Genesis, do you?" So asked the slightly puzzled Tony Jones of Miroslav Volf right at the end of Monday's Q&A. Jones' question was provoked by Volf's fairly innocuous appeal to Genesis when answering what seemed to be a leading question from a Christian concerned about attempts to deconstruct gender.

Whilst the question from the audience gave an insight into the pre-occupations of one strand of contemporary Christianity, and Volf's answer provided an insight into one theologically nuanced account of gender, Jones' puzzlement offered a snapshot of the state of the public discussion of theology. This was reinforced by Jones' bemused chuckle that followed Volf's interrupted attempt to explain how Genesis might be read.

Volf's answer and his curtailed explanation of his use of Genesis were both pretty standard fare for theologically-informed Christians. But Jones seemed unable to take them at face value. He appeared to lack a framework that could combine an appeal to Genesis with Volf's intellectual sophistication.

My concern is not to criticise Jones; he more than holds his own in most discussions. Rather, it is to reflect on the opportunities provided for theologically-conscious Christians in articulating their faith in public.

The various points of entry into the contemporary public square suit some Christians better than others. The ideological and cultural forces which have defined those points of entry have led to journalists such as Jones inheriting a whole raft of assumptions about what Christianity is and how it is to be talked about in public. On the basis of those assumptions they know how to engage the ACL or George Pell or even activist mainstream Christians. These represent the Christian 'types' that have a defined and variously tolerated place in the contemporary public square. Journalists and commentators know how to disagree or agree with them. 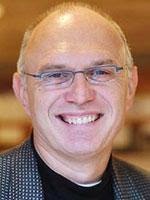 But a theologian such as Volf and the kind of critically-articulated faith he represents offer something different. It's as if he's slipped in under the guard of the public square's gatekeepers and forced open a new entry point for theology. And once in, he's trying to carve out a different space for theological conversation that the public square isn't quite ready for or doesn't know how to handle. In this respect, perhaps there are certain parallels between Volf and Rowan Williams. When they are not understood, it is not that they are being inconsistent or obscurantist. They are trying re-shape a conversation that has become all too predictable and often boring.

To be honest, I couldn't really get into Volf's book A Public Faith when I read it last year (and I was a bit disappointed with some lectures he gave last week in Melbourne). After watching him on Q&A - an explicitly public space - I think I hear him differently. Perhaps he's not just confronting Tony Jones' assumptions, but also challenging Christians to take the risk of different kinds of public conversations. They'd be conversations in which all participants would quickly learn that the question, "You believe in Genesis, do you?" isn't actually a very nuanced question.

Posted by Geoff Thompson at 9:38 AM 2 comments: