I recently spent three weeks in India. Apart from a few days being a tourist in New Delhi, I spent my time first at the Mar Thoma Theological Seminary (MTTS) in Kottayam and then at the United Theological College (UTC) in Bangalore. At both places I was the recipient of extraordinary hospitality, both from Faculty members and students. I don't say this lightly, since I know that visiting academics always require time and effort from the locals. At both institutions this time and effort were given generously and for that I am immensely grateful. Particular mention to R.D. Sahayadhas, Shiby Varughese, Santosh Kumar, Allan Palana, George Zechariah, Prakash George, Jibu James and Lethin Joseph.

Spending time in India was a planned part of my sabbatical project, i.e.,  writing the book on Christian Doctrine in Bloomsbury's 'Guides for the Perplexed' Series. My approach is not simply to write an overview of Christian doctrines, but to address what exactly Christian doctrinal discourse is, what forms it takes, and the roles it performs in the life and witness of the church - not least in the face of the enormous theological diversity which characterises the world church. If, as conventionally understood, one of doctrine's roles is to be an identity marker of Christianity, then this diversity throws up particular challenges. Of course, doctrinal diversity and change have always been issues in the church and have received all sorts of critical reflection over the centuries. In the present context, however, the debate about diversity, change and constancy has taken on a sharper political edge in the light of the power issues at stake in the relationship between the theological traditions of the West and those of the now majority churches of the Global South. So, it was important for me personally, and for the project, to familiarise myself, even in some small way, with the conversations, issues and themes in one part of the non-Western church. (I hope to engaging in similar way with theologians in China later in the sabbatical.) What follows are just a few of my reflections - and some highlights of the reading list I have come home with!

I had long heard about the ancient presence of Christianity in India with the legend that Thomas (the apostle) brought the Christian message to the existing Jewish community in coastal south-western India as early as AD52. (Historians, suspicious of the legend's early date, nevertheless acknowledge a reliable claim to the existence of the church in India possibly as early as the end of the second century. And there is evidence (albeit disputed) of the presence of the 'Bishop of Persia and India' at the Council of Nicea in 325! For an account of the history of this church go here.) My time Mar Thoma Theological Seminary, however, was my first direct encounter with this community. I enjoyed being a welcomed participant in the services in the Seminary chapel. During one Eucharist, I was struck listening to an all-male rendition of Charles Wesley's 'O For a Thousand Tongues' in a liturgy which had already easily switched between English, Syriac and Malayalam in a liturgical structure inherited from Syriac sources!

The relationship between context and tradition in this church is, unsurprisingly, fascinating. I saw this first hand at a seminar on Ecclesiology and Context held whilst I was there. The sources drawn on in this discussion ranged from contemporary Dalit Theologians, the mid-twentieth-century Indian theologians such as M.M. Thomas, and Syriac Fathers such Ephrem and Aphrahat. To a large extent the dynamics of this internal conversation were somewhat opaque to me as a visitor. But the capacity to negotiate between authoritative ancient voices and contemporary Indian ecclesiological, missional and political themes was salutary, even enviable. What was of particular interest was to hear Indian theologians entering the discussion between respective Eastern and Western  views of history and eschatology. Through their appropriation of the Syriac tradition, they occupy a space largely unfamiliar to those of who work with much blunter definitions of East and West. Moreover, this was no abstract discussion. It led directly to discussions about liturgy and mission.

UTC is a somewhat different institution. It is an ecumenical theological college, drawing faculty and students from a broad range of Indian churches. As with MTTS, it is a college of Serampore College (India's first University). It is a well-resourced institution with a large faculty (20+), a high-quality library and and a range of accommodation facilities (the college is fully residential and every year has to turn away the many applicants who exceed the 200 or so it can accept!). As at Kottayam, I had the opportunity to share two papers, "Doctrinal Change and Constancy in a Global Church" and "Baptism, Eucharist and the Kingdom". The first provided an opportunity to discuss the place of context and tradition in Indian theology. Alongside issues of Dalit Theology and Tribal Christianity which I knew would be on the agenda, I also got a sense of the impact of Hindu nationalism on the mood of the church and the task of theology. This was more significant than I had been anticipating. The latter provided the opportunity for conversations about anti-conversion laws (obviously not unrelated to the nationalist agenda) and re-baptism (which, as in the West, has become an issue with the increasing impact of charismatic and Pentecostal churches on the more 'mainline' Indian churches). I was able to attend the daily chapel services conducted by the students and got some sense of the seriousness, even intensity, of their theological engagement with the issues confronting  the Indian church and society. At UTC, too, I was struck by the ease with which faculty and students were able to move between different Christian theological traditions and the present demands of gospel proclamation. What we in Australia often experience as more defined theological fault lines seems a little more porous in India.

I am still absorbing all that this means for my project, and I have come away with some key readings to help me. Below are a few key texts: 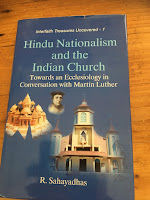 The title of R. Sahayadas' 2016 significant work is itself tantalilsing: Hindu Nationalism and the Indian  Church: Towards an  Ecclesiology in Conversation with Martin Luther. Although I have yet to engage the book at length, it presents as a key example of the ability I noted above of moving between traditions towards a constructive proposal for the contemporary Indian church. 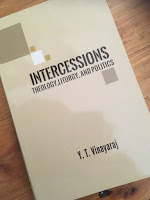 In both Kottayam and Bangalore I was told about the work of Y.T. Vinayaraj and advised that he is one of the emerging key figures in Indian theology. Drawing on post-colonial theory his interests appear to be focused on developing a ecclesiology of marginality and 'manyness'. In fact, he is rather dismissive of the the more usual rhetoric of unity-in-diversity as too politically neutral. He argues the the concept of 'manyness' or 'multitude' "does not mean unity-in-diversity or commonality..., rather it is shared solitude, a set of relationships without a single essence". I've already made an attempt at analysing Vinayraj's poststructuralist doctrine of God in the light of Trinitarian arguments in an article that will be published later this year in the Mar Thoma Theological Journal. This particular 2015 book, Intercessions: Theology, Liturgy and Politics is a collection of nine essays exploring postcolonial theory, radical ecclesiology and ecumenism. 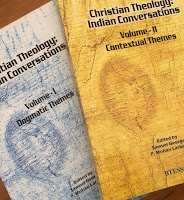 This pair of volumes is produced by the Board of Theological Education of the Senate of Serampore College as texts which introduce students to Indian theological writers. The first thing to strike me about these complementary volumes is their title: Christian Theology: Indian Conversations. This embodies the issue I am working through in my own project. In this world of so many theologies, can we still speak of Christian theology? I look forward to engaging how the various contributors to these books (respectively about Dogmatic Themes and Contextual Issues) understand themselves as both Christian and Indian theologians and how they perceive the relationship between diversity and unity in theological work.

So, it was a great three weeks, I'll be working through all the issues I engaged and the lessons learn for a great many more weeks.
Posted by Geoff Thompson at 10:34 PM No comments: