Western Christianity's death wish? It's not that simple

A few days ago the Sydney Morning Herald carried an article first published in UK-based The Telegraph: "Why Western Christianity has a death wish." The title of the version published in the UK was much more assertive: "Western Christianity isn't dying from natural causes.  It's dying of suicide." The author, Tim Stanley, who identifies himself as a Catholic, places his focus on the numerical decline and what he argues is the irrelevance of the Church of England. This is taken, in a rather cavalier way, as representative of Western Christianity. Be that as it may, his argument is not an unfamiliar one to those who follow these sorts of discussions.

A few scenarios and a couple of statistics are invoked to paint a picture of a church to which no one is willing to listen and certainly very few wish to belong.


Like many agonies, you can blame it on the 1960s. The experiences of world war and nuclear threat seemed to necessitate a rethink in the way Christians acted: to preach less, listen more. Protestants and Catholics tried to meet people halfway, to talk to them in their own language. This could have been a marvellous project; humility and meekness are inherently Christian virtues. The crucifixion turned weakness into a strength, say the gospels, offering Jesus as a sacrifice for the whole of mankind. And, yes, it's good to talk to the other faiths and, of course, social justice is a divine calling. At some point, however, dialogue turned into deference and socialism became the only face many bishops were comfortable showing the world.

A "greying church leadership" is criticised for "stubbornly cling[ing] to the nostrums of the 60s" and for becoming "comfortable with underperformance." His point, he insists, is not about favouring any particular theology over another - it's something deeper: "[I]t's about whether the Church talks chiefly about man [sic] or about God. Whether Christians have a distinct message at all."

(I concede that my insistence on [sic] reveals my stubborn 1960s slip.)

Yes, it does matter whether the church has a distinct message. But does having a distinct message ensure the reversal of the trends that exercise Stanley? Can the perceived irrelevance of the mainline churches in the Europe, the UK and Australasia be exhaustively explained by those churches abandoning Christianity's distinct message. And are those churches that buck the trend doing so because they remain distinctive? After all, a message can be distinctive and false. And a message can be relevant and true. But there are no neat correlations here - the history of Christianity is replete with faithful churches disappearing and faithless churches prospering.

And that brings me to Stanley's final point. It entails a quite revealing - but not uncommon - twist.

Churches need to be strong for when people decide they do need them - in moments of celebration, more often in commiseration.
Faith helps us deal with life and death, and the Anglican Communion, for all its wounds, remains a repository of culture and ethics. Remember: it is beauty and kindness that keep us from sliding into barbarism.

So, it turns out that the church's real purpose is "to be strong" in order to meet certain cultural needs. This, Stanley seems to be implying, is the natural state of Christianity from which the Church of England has fallen - and along with it other churches of the West.

With this diagnosis, however, Stanley reveals himself to be 'stubbornly clinging to the nostrums' of Christendom. Stanley, no less than the 'greying church leadership' he decries is taking his cues from a particular set of cultural assumptions.

Articles like this, not least because they appear in the secular press, are often used as ammunition in in-house church discussions. To the extent that they are perceived as such often depends on those inside the church assuming the neat correlations between cultural accommodation and decline or, conversely, between distinctiveness and growth.

If, however, we are really to ask about the distinctiveness of  Christianity, we need to go back to the figure of Jesus and the strange things he is remembered to have said about himself and the odd gospel about him that his first followers proclaimed. It is this person (who is referred to only once in Stanley's article, and a little grudgingly at that) and the gospel about him which are completely eclipsed in Stanley's analysis. Jesus' mission simply cannot be construed in terms of producing strong churches for when people need them or of providing a repository of culture and ethics. These may well be be good and valuable long-term outcomes of Jesus' ministry. But what was distinctive about him was his cryptic and suggestive preaching about the Jewish notion of the kingdom of God, the way he placed himself centrally in the hopes for that kingdom, and how he lived into that kingdom through suffering with the expectation divine vindication.

Only by wrestling with those features of Jesus' identity and ministry can any church be drawn into . the distinctively Christian message. And that will spill over into distinctive ideas about such matters as God, salvation, forgiveness, mercy, love, community and hope. The distinctive Christian message is at once compelling and disorienting, reassuring and costly, clear and opaque. And, I would suggest, that only those churches who do undertake that wrestling will have any hope of getting critical leverage against Christendom. With all its promise of success, power and cultural influence, Christendom (be it political, psychological, intellectual or cultural) is an enduring trap waiting to capture any church that assumes the neat correlation between distinctiveness and growth.

But that some of the West's churches look less culturally robust than Tim Stanley thinks they should reflects a more complicated story than the one he presents. Some are working hard at gaining that critical leverage against Christendom and going back to the basics and rediscovering the singular strangeness of Jesus and his revelation of God's love - unencumbered by what Stanley seems to imply is the natural state of Christianity. What he perceives as a death wish might actually be a wish for the life that only God can give, however strange that life might look to the assumptions of Christendom and the culture that wants 'strong churches.'

Posted by Geoff Thompson at 12:29 PM No comments: 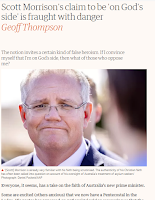 I've written a short piece for The Guardian about some aspects of how Scott Morrison understands the connection between his Christian faith and his political vocation. I raise note the dangers of claiming to be 'on God's side' in the context of the adversarial and partisan world of Australian politics (quite apart from it being theologically problematic in any case).

I also think there needs to be some push-back against those Christians who see the elevation of their kind of Christian to top job somehow being a plus for Christians. I see matters quite differently.

Deep in the logic of Christian faith is the idea that God is impartial. The only “side” that God’s takes (if that language must be used) is the side of all humanity. This, moreover, is why those Christians welcoming Morrison’s elevation to the prime ministership as indicating some sort of benefit to Christians are so wrong in their understanding of Christianity.

You can read my article here.


Posted by Geoff Thompson at 4:55 PM No comments: