What the (theological) willy wonka?

"What the willy wonka was that all about?" So asked my friend and colleague, Jason Goroncy, in response to the Hillsong London version of Silent Night that's been doing the rounds on the web in recent days. Jason's question prompted a good conversation on his blog, and he himself has now responded with his own typically thoughtful comments. Jason encourages some searching questions about how to interpret this performance in a way that's theologically serious and fair. He also points out that the discomfort many of us (and I count myself in this number) experience watching this might properly be transferred to other Christian 'performances' and 'symbols' which don't cause the discomfort which they perhaps should. So, an extract:

Watching the performance of this single song, online, nearly 17,000 kilometres from where it was performed, I have the same kind of confusion I experience whenever I worship in a building with a national flag in it; or an Honour Roll commemorating those who gave their lives in ‘the service of freedom’ and ‘for God, King and Country’, some of whom, it is noted (sometimes with the sign of a little cross!), ‘paid the supreme sacrifice’; or whenever I see a reference, in my ecclesiological territory, to ‘senior pastor’; or when I hear that a qualification for being a bishop (in some other ecclesiological territories) is proof of a penis; or whenever I see an innocent bunch of carnations perched on a baptismal font;....


Check out Jason's first post and the ensuing conversation here.

And if you haven't seen what everyone's talking about, here's the video in question:


Posted by Geoff Thompson at 2:24 PM No comments: 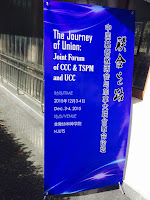 Two weeks ago I had the privilege of being an 'observer' at a forum between the China Christian Council and the United Church of Canada.  It was held at the Nanjing Union Theological Seminary. My presence there was part of growing partnership between the CCC and the Uniting Church in Australia. We had held a similar joint forum with the CCC in 2013 and hope another one might eventuate in the near future.

Here are a few highlights and learnings: 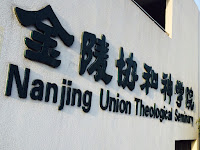 Several themes emerges from even a rapid engagement with these works: the sheer complexity of the history (ancient and recent) of Christianity in China; the immense diversity of Christianity in China, a diversity which extends from the impact of contemporary Pentecostalism to alliances between Christianity and folk religion; and the challenges of being the Christian community in a one-party state (a challenge which is not reducible to the status respectively held by the registered and unregistered churches); and the need for Westerners to recognise that 'state' oversight of religious activities has been part of Chinese culture and society for over a millennium. I would also draw particular attention to the work by Yang Huilin mentioned above. Huilin is a leading Chinese academic, presently the Vice-President of Renmin University in Beijing. Huilin is among a group of Chinese intellectuals - only some of whom are Christian - who engage with Christian theology as an intellectual discipline in its own right. In this particular book Huilin engages Christian ethics, the place of theology in the humanities, Zizek's post-secular appropriation of Christianity, and even a chapter on Scriptural Reasoning, as tools for dialogue between China and the West. Whilst I understand there is some ambivalence from the church theologians towards this enterprise, it is fascinating - and perhaps salutary- that intellectuals outside the church find Christian ideas interesting precisely as ideas which have contributions to make to the welfare of Chinese culture.


Once again, I returned from a visit to China deeply grateful for the opportunity to be exposed to this growing church, and on this occasion also to learn about another united/uniting church, i.e., the United Church of Canada. The blog which the UCC delegation produced throughout its visit can be found here. I'm grateful to both delegations for letting me eavesdrop on their conversation.

The Western Australian Synod of the Uniting Church in Australia is currently seeking a Director of Education and Formation to join their leadership group. The core purpose of the role is to provide leadership in the achievements of a culture in which faith formation for discipleship and leadership is prized, appreciated and seeks to build an informed and integrated learning community directed to the mission of God. For position description contact Monica Pettersen on 9260 9800 or email monica.pettersen@wa.uca.org.au> . Please send your CV and cover letter (for the attention of Rosemary Hudson Miller, Acting General Secretary), by e-mail to Human Resources Advisor monica.pettersen@wa.uca.org.au>. Applications close at 5.00pm on 16 December 2015.
Posted by Geoff Thompson at 6:07 PM No comments: