American Theologian and author of Theology and the End of Doctrine, Christine Helmer, will be a visiting scholar at Pilgrim Theological College in August 2018.

She will be giving a Public Lecture ("Ecclesiologies of Resistance"), an academic seminar ("A Brief Introduction to Schleiermacher’s Most Important Ideas") and several lectures in the Intensive unit, 'Doctrine, Truth and Pluralism'. The latter is taught over two blocks, Aug 24-26 and Oct 12-13. Professor Helmer will be teaching in the first of those.

Further details are available here and more will be posted in due course.

Posted by Geoff Thompson at 11:19 AM No comments:

This is as good an introduction to the emergence of the post-truth era and its consequences that I can imagine being condensed into 170 pages. McIntrye, a Research Fellow at the Center for the History and Philosophy of Science at Boston University, writes in an engaging and lucid style. The story he tells is an unhappy one, and no reader will be left in any doubt about the seriousness the problems he highlights. But he also points in several directions for how resistance to the apparent triumph of post-truth rhetoric, ideologies and political strategies might be carried out.

Perhaps the most important point he makes near the outset of the book is that post-truth refers to  a situation where truth is not necessarily denied, but where it is consistently, aggressively and dishonestly subverted - and for political purposes: "...post-truth is not so much a claim that truth does not exist as that facts are subordinate to our political point of view" (p.11). The dishonest element of post-truth is made abundantly clear in the sketch he gives of the organised science-denial organised by the US Tobacco Industry in the 1950s. Strategies employed then would later be deployed in the denial of climate change.

The commercial and ratings-inspired roots of cable news are explored. The shift of TV news from information to entertainment, and its consequences for public debate, are clearly set out. Reading the origin of the portrayal of false-equivalences between genuine experts and opinionated activists, reinforced by the split-screen of talking heads, made me ponder just how pernicious these developments have been and how deeply embedded they now are in the way we discuss issues. The seeds of 'fake news,' 'alternative facts,' and the discrediting of the mainstream media were sown long ago. They will be hard habits to break even if society at large generates the will to do so.

The penultimate chapter, 'Did postmodernism lead to to post-truth' was certainly the chapter which I found pressed the most significant intellectual issues. He claims that the "pathway from science denial to full-blown reality denial itself seems undeniable." He continues: "What would an application of postmodernism to post-truth politics look like? It looks a lot like the world we now inhabit" (p.144). Interestingly, he places this connection against the backdrop of competing politics: "What a complete misfire of the original politics that motivated postmodernism, which was to protect the poor and vulnerable from being exploited by those in authority. It is now the poor and vulnerable who will suffer most from climate change." In all this, he says, the academy has failed in its responsibility: "It's all fun and games to attack truth in the academy, but what happens when one's tactics leak out into the hands of science deniers and conspiracy theorists, or thin-skinned politicians who insist that their their instincts are better than any evidence"(p.145).

He laments (and alleges) that philosophers have been silent as the post-truth forces gathered momentum in recent decades. But he commends Daniel Dennett for the latter's critique of postmodernists. He favourably quotes Dennett's claim that postmodernists "are responsible for all the intellectual fads that made it respectable to be cynical and about truth and facts. You'd have people going around saying: 'Well you're part of that crowd who still believe in facts'" (p.148).

And therein lies something of the source of my own criticism of the book, notwithstanding that it is very much a book worth reading. The quotation from Dennett contains the important and necessary distinction between truth and facts. I'd like to have seen McIntyre discuss at much greater length the modes of truth telling which are not reducible to announcing or reciting facts, and how such modes of truth telling are themselves important resources in combating post-truth.(That might also have necessitated a more nuanced account of postmodernism than the one given, but that's another matter.) I think there are important philosophical reasons for such a discussion and there are certainly good Christian theological reasons as well. In fact, Christian theology's long and sustained reflections on truth, language and faith may well have some helpful and unexpected contributions.

The book concludes with some brief case studies of where courageous resistance to post-truth denials of truth have been carried out - including by politicians. McIntyre's final paragraph is both challenging and (cautiously) hopeful - but certainly not triumphalist:


Post-truth is not about reality; it is about the way that humans react to reality. Once we are aware of our cognitive biases, we are in a better position to subvert them. If we want better news media outlets, we can support them. If someone lies to us, we can choose whether to believe him or her, and then challenge any falsehoods. It is our decision how we will react to a world in which someone is trying to pull the wool over our eyes. Truth still matters, as it always has. Whether we realize this in time is up to us (p. 172).

This occasional series of 'books worth reading' engages an eclectic selection of books: some directly related to my teaching, some to the UCA, and some of more general theological interest. They are not offered as technical book reviews, but as summaries which highlight why I think they might be useful resources, good conversation starters, or volumes that make helpful contributions to scholarly debate.

Posted by Geoff Thompson at 5:00 AM No comments:

Good News and Fake News: Discipleship and Conviction in a Post-truth Age 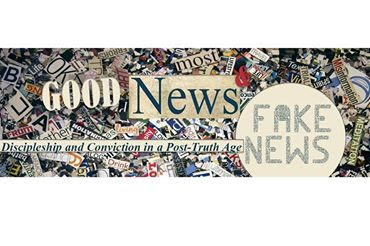 Next month I'll be giving three keynote addresses on the above theme at the annual School of Discipleship event in Sydney. You can read about the event here, and catch a glimpse of my themes here.

It's not too late to register. It's a mostly young-adult group, usually 100+ participants. SOD is associated with various movements that identity as 'Radical Discipleship'.

Posted by Geoff Thompson at 4:55 PM No comments:

Every month the magazine of the Victoria/Tasmania synod of the Uniting Church carries an article by a member of the Faculty of Pilgrim Theological College. This month it was my turn. I took some remarks from Cornel West's eulogy to James Cone a as a springboard for some reflections about the connection between discipleship formation and theological formation.


West referred to the challenges Cone faced when growing up in deeply-segregated Arkansas in the pre-civil rights days. He drew attention to the way Cone’s family and his church (the African Methodist Episcopal Church) had shaped him to be the person he was and to have the gospel commitments he did.
Professor West made two points about this. First: “That’s what we need these days,…the spirit of the tradition that produced a James Cone.”
Second: “He was already fortified before he got to Union Theological Seminary.”
Both of these comments are worth thinking about in the context of the Uniting Church. They prompt two questions: ‘What kind of people should our church communities produce?’ and ‘What does a theological education contribute to those already formed by their churches as Christian disciples?’

You can read the whole article here.
Posted by Geoff Thompson at 4:52 PM No comments: