Does this confess 'the faith of the church'? An Easter Reprise 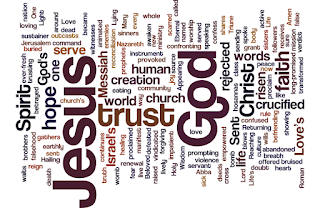 Easter seems a good time to return to the Confession of  Faith I drafted some months ago. I am grateful for the responses from many and various people to the earlier version. There have been many conversations which have made me think a bit more carefully and be clearer about what I was trying to communicate. I won't explain the detail of all the changes that ensued from those responses. Nevertheless, I doubt it will take long  to recognise the following as the key issues which I've addressed: the relationship between historical an doctrinal claims, the emphasis on the unity of  God as the starting point, gendered language in the second article, more care in the claims made for the church, and a few others.

I've had several requests to use this in various contexts. I'm very glad for it to be used. It's a public document intended for use in the church. If it is used, I would always be interested to know how it is received and/or adapted.


We trust the one God.


We trust the Love and Life who is the source and sustainer of all that was, is and will be.


We trust Jesus Christ, Love’s Beloved, Life's Light, Eternal Wisdom, Israel's Messiah, God with us.
Sent from the very heart of God's love for the world, coming not to be served but to serve, Jesus became human in the womb of Mary.


Reaching Jerusalem, prompting hosannas, trusting the one he named ‘Abba’, he offered himself as the servant Lord; he was rejected, abandoned and betrayed, and then crucified on a Roman cross as a false Messiah.


Lying dead and buried in a tomb, God raised this Jesus to new life: the human verdict was reversed; violence was rejected; the earthly mission was vindicated; death was defeated, the reconciliation of the world to God was manifest


Appearing, speaking and eating, this transformed body provoked fear, doubt, joy and hope. With words of peace the risen Jesus empowered these confused followers, sending them as witnesses to the way, truth and life.


Returning, scarred and bruised, to the One who sent him, Jesus now shares in Love’s rule and receives the worship of his sisters and brothers from every culture, class and nation.


We trust the Holy Spirit, the loving and lively breath of God, who blows where she wills: in, around and through the whole creation.


This same Spirit spoke through Israel's prophets, animated Jesus' ministry, and gathers a community, the church, which, like Jesus, is called to serve; it is an instrument through which Christ continues to command attention and awaken faith.


Sent by the Spirit, the church is to proclaim the risen, crucified Jesus Christ in ever-fresh words and deeds; it is to witness to God's renewal of all creation, for which it waits with an impatient but sure and active hope.


This is the church’s faith. It is the faith we confess. In this Triune God we trust. God grant us so to live and hope. Amen.

What is the Bible?

In the midst of the current public use of the bible in Australia's same-sex marriage debates, I've written some thoughts on what the Bible is and argued that the 'what' and 'why' questions about it take theological precedence over the 'how to read it' question.

There's some Kevin Rudd, Walter Brueggemann, Rowan Williams, Augustine and also this rather beautiful paragraph from the First Helvetic Confession of 1536.

The entire Biblical Scripture is solely concerned that man understand that God is kind and gracious to him and that He has publicly exhibited and demonstrated this His kindness to the whole human race through Christ his Son. However, it comes to us and is received by faith alone, and is manifested and demonstrated by love for our neighbour.

The whole piece has been published on the ABC Religion and Ethics website.
Posted by Geoff Thompson at 11:01 AM No comments: