Recalling Colin Williams
An Evening Seminar
7pm, Wednesday 24th June
(6pm for optional dinner)
Centre for Theology and Ministry,
29 College Crescent, Parkville  3052
Speakers: Brian Howe, Ian Weeks and Damian Palmer
Download the flyer here.  This includes booking details for the pre-seminar dinner.
Colin Williams was a significant Australian theologian in the Methodist tradition who spent most of his career in the United States. Before leaving for the US, he was Professor of Systematic Theology at Queen's College in Melbourne and was a member of the Joint Commission on Church Union. I understand he played a leading role in the writing of the Commission's second report, The Church: Its Nature, Function and Ordering. His most notable scholarly work was John Wesley's Theology Today: A Study of the Wesleyan Tradition in the Light of Current Theological Dialogue (1960). Half a century on, it remains available for purchase and it still gets quoted in critical studies of Wesley's thought. After leaving Australia he became a major figure in America's ecumenical and theological circles from the mid-1960s through to the 1980s, including a decade-long stint as Dean of Yale Divinity School. The United Methodist Church maintains a significant archive of his papers.
* * * * *
Last year I had reason to read Williams' 1965 book, Faith in a Secular Age. The book, as the title implies, explores the roots and contours of the rise of the secular, and canvasses alternative reactions of the churches to it. He offers this description of the secular which at the time was pressing itself upon the consciousness of the American church. 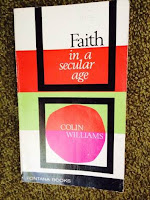 We are witnessing…the rise of secular man (sic). It is not suggested that this secular attitude is the product of a sudden change in man’s way of thinking. On the contrary, the change has been brewing for centuries and behind it there lies factors such as the rise of the scientific attitude, the successful bid for the autonomy of increasing areas of human thought from ecclesiastical tutelage, the subsequent flight of institutions from the church’s direct control…., and the spread of an attitude of this-worldly confidence. … With this increasing dependence upon the new things that man can create ‘from below’, there has come also a continuing diminution of the wisdom that comes down into our life through religion and revealed truth. (.p.20)
Obviously, this is a very much a description of the secular rooted in the discourses and assumptions of the 1960s. Reading Williams, you don't have to scratch too far to realise that he was writing in an environment informed by demythologising, the death of God, and various 'secular' theologies.
Like others at the time, Williams offers a positive assessment of this rise of the secular. It is not so much to be resisted by the church but as a new condition in which faith can be reformed and fine-tuned for the sake of the church's mission.
The rise of the secular attitude to life must be interpreted positively as the fruit of the gospel and…religion must be interpreted not as the cause we are called to defend, but as the mythical, metaphysical, ontocratic clothing of our childhood that we must now learn to put off if we are to be for true faith in the living God as he is working in the events of our time.
There is an impulse to cross the interface between the church and the world, to move out from the church and its insularity and into the world and its only apparent secularity. ‘Only apparent’ because God has not given up on the secular world, even if the secular world has given up on God. The theological rationale for this is not simply frustration with the insularity of the church and the confines of ‘religion’.

I guess that among the issues which might come up at the seminar would be these: Has the church actually learn that lesson (of turning its eyes to Christ) or is it still learning it? Can the confidence in the 'secular' be transferred to the present context, half a century later? Can this christologically-driven 'openness to the world' be extended to multiple definitions of 'secular' and a church/world interface which seems irreducibly complex? How do William's insights help us address the contemporary situation.
Come along and engage with Ian Weeks and Brian Howe, both of whom knew Williams, as well as Damian Palmer who has been pursuing research on Williams as part of a wider project on twentieth-century ecumenism.

Posted by Geoff Thompson at 4:18 PM