On Palm Sunday I participated in a public liturgy and in a protest rally. The proximity of the two events prompted these still somewhat untidy reflections on the fluid boundaries between liturgy, protest and politics. 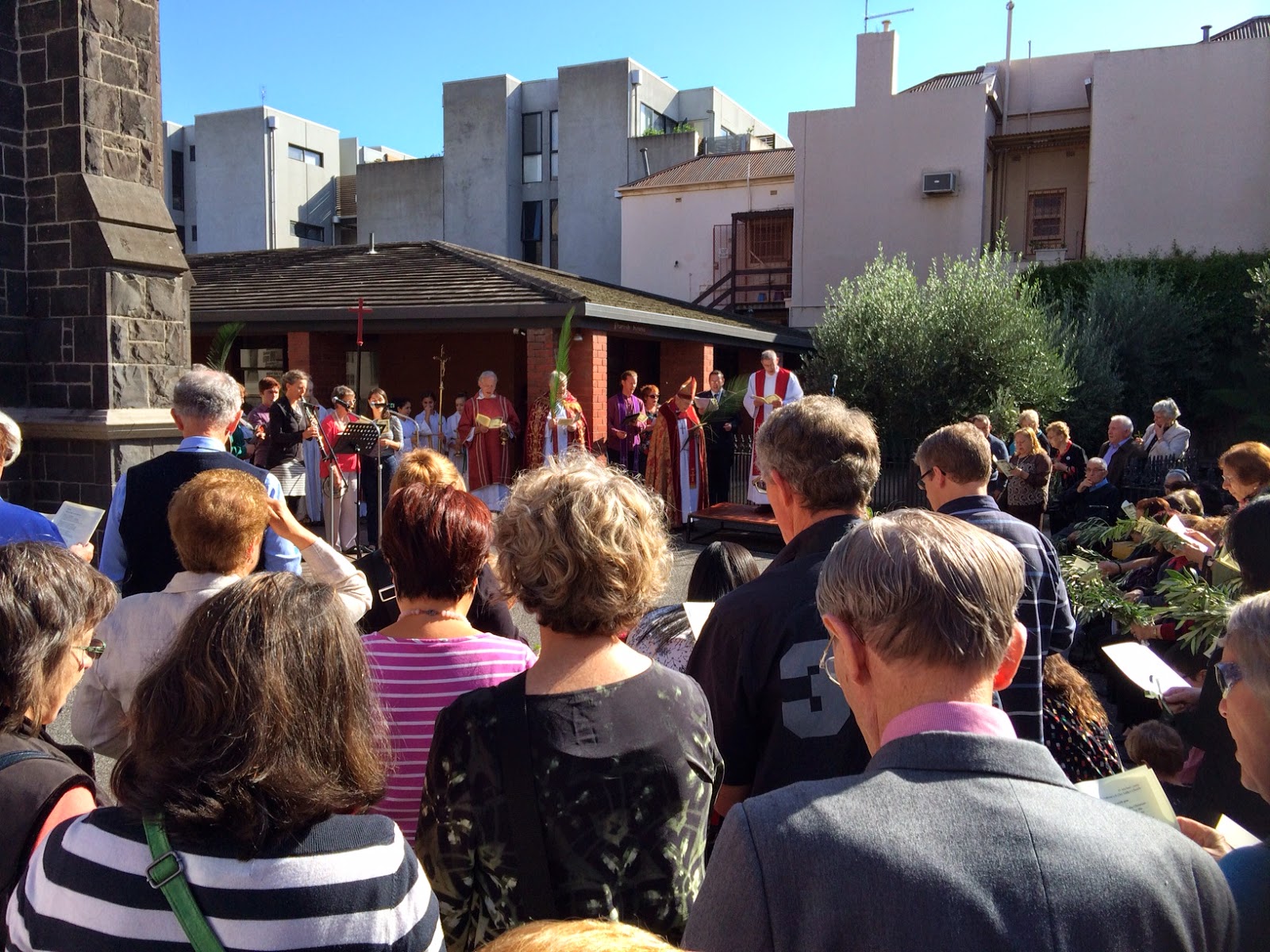 The public liturgy occurred in the forecourt of St. Ambrose's Catholic Church in Sydney Road, Brunswick. The occasion was the annual Brunswick Ecumenical Palm Sunday Service. The Salvos, the Anglicans, and Baptists and the UCers all walked from their respective churches to meet at St. Ambrose's. I don't know what reactions the other groups drew as they walked along Sydney Road, but those of us walking from the UC got a mixture of car horns, curious looks and indifference - together with the quiet mutterings of those who suddenly found the footpath more congested than it usually is on a Sunday morning.

Once gathered, we did what Christians typically do. With shoppers, trams and the Sunday morning brunch brigade passing by, we prayed, we sang, and we listened. Specifically, we listened to the narratives of Jesus' fateful entry into Jerusalem and we were encouraged to enter into the challenges of Holy Week and Easter. It was a protest of sorts.

The rally - just a couple of hours later - was held in central Melbourne and part of the nation-wide protest against Australia's present scandalous treatment of asylum seekers. Here Christians - of all sorts and varieties - mingled with thousands of others. All were united in their indignation at what is being done by this nation.

We did what people normally do at such rallies. Placards were waved. Some music was performed. Speeches were made. We variously applauded and cheered (when speakers, especially the UCA's Alistair Macrae, found just the right words to focus the crowd's concerns). And there was even a bit of jeering (when speakers mentioned certain policy makers and their policies). Then the march itself began. It was a liturgy of sorts.

In the weeks straddling Palm Sunday the Australian community has been able to witness another combination of liturgy and protest. Not just a liturgy of sorts or a protest of sorts, but the explicit merging of liturgy and protest. Groups of Christians have gathered to pray in the offices of the politicians overseeing the current refugee policies. They have crossed the usual boundaries between liturgy and protest. In doing so, they've provided an insight into both. Here faith, hope, human action, morality and discipleship all converge in a quite particular way. This is a time-honoured form of protest by Christians.

As I see it, the challenge posed by those who in Christ's name have prayed in the offices of Scott Morrison and Julie Bishop is to remind the rest of us that Christian worship is properly political. At the most basic level, worship presses the question of our ultimate allegiance. The question of whether we worship God or the gods is on the line. The common, even mundane, practice of gathering together to worship is political, if for no other reason than it gathers people together for a specific purpose. More specifically, as Christian people are gathered together to worship Jesus Christ, we willingly expose ourselves to the narratives, rituals and practices that form us as his disciples. Exhortations such as the following are not an appendix to the liturgy, they remind us of what is at stake in our praising, confessing, listening, eating and drinking.


Go forth into the world in peace; be of good courage;hold fast that which is good; render to no one evil for evil; strengthen the fainthearted; support the weak; help the afflicted; honour everyone; love and serve the Lord, rejoicing in the power of the Holy Spirit...

A life so lived is inevitably a politically-charged life because it seeks to resist the narratives, rituals and practices of many of the prevailing orders. If there is no match between this dismissal and what has come before it, then there's a good chance that the liturgy has been de-politicised. 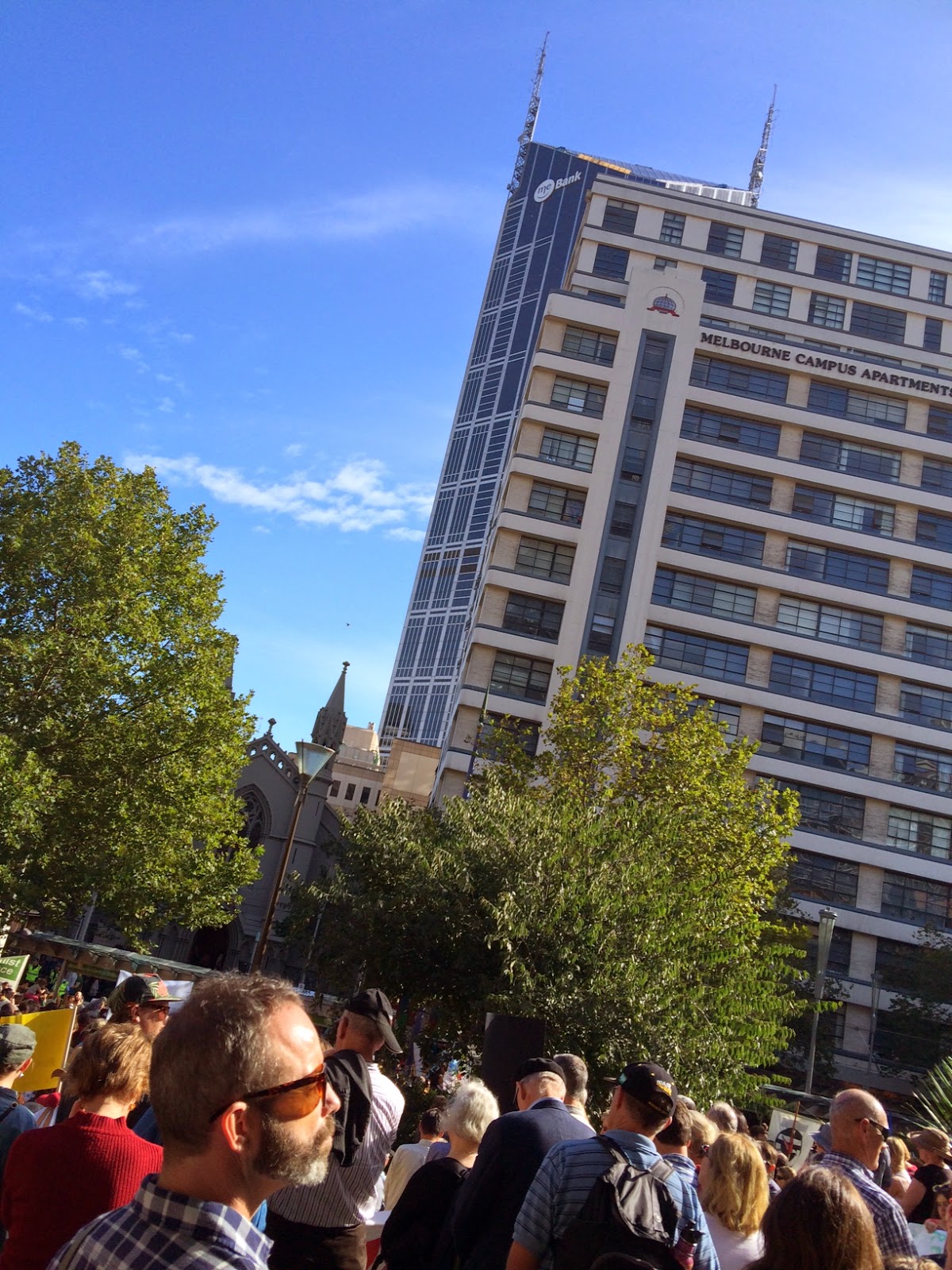 But back to the Palm Sunday rally. One of the speakers concluded her speech by saying something about how the government's policies were betraying the nation's character. At the very moment she said that I was taking this photo. It's a pretty feeble photo, but there's a telling juxtaposition of the church and the powers of the day. A tiny, steepled church (between the trees) is dwarfed by sky scraper (in the background) dedicated to commerce and profit.

And that's one reason why I go to church. I go to church to be politicised. I don't go to have my 'spiritual' needs met; I don't go to encounter the 'sacred'. I to to become a person whose desires and aspirations are directed away from the 'ME Bank' and away from the inhospitable spirits of our age. I go to have my desires and aspirations redirected to the one God. It's a chance to be exposed to and once again en-grafted into the drama of the risen crucified one, and the self-giving way of God which he embodied.

On the face of it, it's such an impotent story, literally and metaphorically dwarfed by the social and economic skyscrapers that dominate our cultural horizons. But because that story has been told, enacted and embodied week by week there are people who have learnt to protest through their words and deeds against the gods of this world and for those denied a voice.

We live in a world of competing narratives and ideologies; yes, a world of many gods. To gather with other Christians to worship God is make a choice within those narratives and to make a statement about our ultimate allegiance. Sometimes that worship and its liturgy will be more public than others. But public or private, if it's not political then maybe it's not worship.

*****
The two books that in recent years have help me to think through some of these issues are:

The full text of Al Macrae's speech is available via the Wesley Church website.

Last year I participated in a conference marking the 50th anniversary of J.A.T. Robinson's Honest to God. A re-worked version of that paper is now available on the ABC Religion and Ethics website. I argue that whatever one makes of the overall argument, neither Robinson's friends nor his critics have fully appreciated the nuances of his intentions. He sought to execute a radical re-casting of the gospel but to do so in a way that preserved what he called 'the fundamentals of the gospel'. I try to tease out what he thought those fundamentals were. I propose two key criticisms of the book: he sought to strip the Christian faith of its eschatological dimension (and thereby rob it of moral force) and that he was somewhat naive about the modern world he was trying to address. I suggest that the key strength of the book - not always noticed by its critics - is the theological exposure he provides of Christian idolatry.

Posted by Geoff Thompson at 11:34 AM No comments: